Kristin Rogghe and Tundé Adefioye will present their vision on what it means to be a city-dramaturg in 2000-now, in an institution like the KVS (Royal Flemish Theater), in a city like Brussels. Illustrating their story with concrete examples from their practice, they will follow three (dramaturgical) lines: the international vs the local, the workings of a large cultural institution vs the urgencies in the field, and the institutional vs the individual. It should be understood that these fields of tension are not static or by definition in opposition, but are constantly in negotiation. 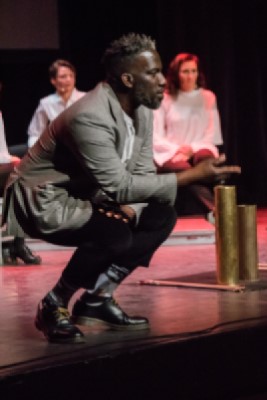 Tundé Adefioye: From San Diego State University, Tunde Adefioye attended his bachelors in Women’s Studies. It is this environment and degree that has guided his artistic and social approach. Specifically this means that Tunde’s practice is steeped in feminist theory as well as the trying to formulate alternative structures and strategies. Whether it is using the work of the Indian environmentalist Vandana Shiva as an inspiration or as the Black feminist lesbian intellect, Audre Lorde proposed creating new tools, Tundé wants to push beyond normative frames. Encouraged by Black feminist professor bell hooks and younger generation afro-futurist like Adrienne Maree Brown, Tundé has formulated several new theoretical frameworks and applied it to his practice to not only challenge himself but also the Belgian and as an extension the European cultural landscape. He co-founded the youth platform Urban Woorden in Leuven, Belgium, and was awarded the Prize for Cultural Education by the Flemish government. In 2016, he began working as city-dramaturg as part of Michael De Cock’s team at KVS. City-dramaturgy aims to use the city as a conceptual canvas to create discourses with different aspects of Brussels and beyond. Additionally, he has done dramaturgy for plays and projects including, Malcolm X,  (Not) My Paradise. In 2016, helped conceived and curated a 3 week residency plus theatrical creation Slam Our World, that is now on its 5th edition. And has curated the musical and slam-poetry projects Jazz n Words and We Orchestrate Words with the Brussels Jazz Orchestra. In 2018-19 he created and help coordinate the participatory project Senior Slam. In 2019, he made his directorial debut with Contact Theatre Manchester, with the piece Old Tools > New Masters ≠ New Futures. Since 2017 he has been delivering lectures and speeches, including giving guest lectures at colleges and a keynote at the 2018 IETM plenary meeting in Portugal, one at the Wales Arts International’s conference, as well as keynote at the European Theatre Convention meeting in Dresden in 2019. In 2019, he helped to create and teaches the course US Popular (Black) Visual Culture at St Lucas Antwerp college of arts. He has published frequently in the major Flemish press, including is often sighted 10 point plan that offered a way to decentralize the cultural landscape. 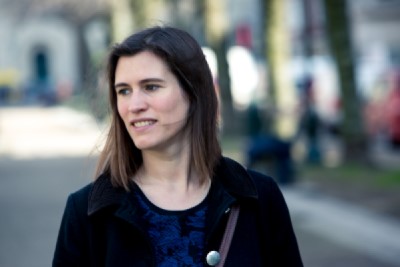 Kristin Rogghe is a Brussels-based dramaturge and art worker with a focus on interdisciplinary, intercultural and collaborative practices. She studied philosophy at the University of Leuven and the Universidade de Lisboa, and Transmedia at the LUCA School of Arts in Brussels, where she applied herself in experimental documentary and video-arts. She received a Fulbright scholarship to pursue Media Studies at The New School in New York and took part in the UnionDocs program for Documentary Arts. During a residency at the Académie des Beaux-Arts in Kinshasa in 2006, her documentary approach shifted to an artistic collaboration with the young Congolese collectif Mungongo Ya Sika, with whom she created several performances and videoworks, and co-realised the experimental film Lobi (Yesterday/Tomorrow) in 2010 – an artistic quest for a common language to broach the (colonial) past, conceive the present and imagine the future. Soon afterwards, Belgian theater director Michael De Cock asked her to accompany the tour of his play Febar in Senegal as a blogger, and engaged her as a dramaturge for several new productions. While working as a dramaturge in theater ‘t Arsenaal in Mechelen from 2011 to 2015, Kristin co-founded and directed GEN2020, a project aiming at making the theater landscape in Flanders more inclusive and diverse – on the one hand by supporting and connecting talented individuals or collectives who were often working under the radar, and on the other hand by pushing towards a mentality shift in the sector, to create the conditions for new voices and diverse narratives to emerge and take center stage. In 2015, she was consulted by Michael De Cock, the then freshly-appointed director of KVS (the Royal Flemish Theater), to develop a new and innovative vision for this theater institution in the heart of Brussels and to co-author its new policy plan. In 2016 she joined KVS’ artistic staff as a city dramaturge, together with Gerardo Salinas and Tundé Adefioye. At KVS, she has done dramaturgy for much acclaimed creations including Malcolm X, Unsung and Invited. She conceived and co-developed the participatory poetry project Rise Up, where Brussels people from all walks of life meet and share their experiences through poetry, and curated the 3rd edition of SLOW in Kinshasa and in Brussels. Kristin Rogghe is also an author of poetry, reviews, interviews and essays (i.a. Bondgenootschap/Allyship, about the ideas of Achille Mbembe and superdiversity in Flemish-Dutch theatre, 2014).